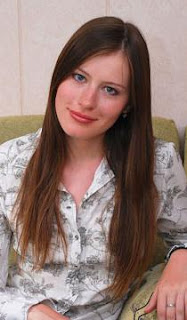 Recently Russian Women's Grandmaster Natalia Pogonina agreed to give an interview to The Weak Square. So I took a few days off of work, learned the Russian language and flew to Russia to meet with her.

This interview may appear awkward at points because of the language barrier. I must openly admit I was not able to fully learn the Russian language in 4 days. Plus there are a few words in Russian that just do not quite translate to English perfectly. I hope you will excuse any imperfect translations.

Without further ado, yours truly is proud to present my interview with Natalia Pogonina.

WS: Natalia, hi. First of all, thank you so much for your time. We need to start with the obvious question. Just so we can go ahead and get it out of the way because the entire chess world wants to know this, are you attracted to 5'7" slightly overweight men?

NP: Height is by far not the most important dimension for a man (smiles)

WS: Right. Well let's move on then. What is your favorite "non chess" activity?

WS: Well, I don't know all about that music, reading, poetry, friends rubbish-but I certainly respect your position on answering questions for 5'7" men. So moving on, what advice would you offer to an adult player who has hopes of reaching a master title one day?

NP: Practice consistently, every day. Find a balance between over-the-board play and studies.
People often make the mistake of preferring one to another. Environment matters – make sure you have chess friends who are of equal or slightly higher level than you, so that you could train, play, hang out together. Mind setting – make sure you can afford spending time, money and nerves on chess.

WS: Hrm, that sounds like too much work. I was hoping for something a little easier but that's cool. Which chess book has been the most influential in your playing career?

NP: I can't name one. I have a link of my ten favorite chess books on my blog.
http://pogonina.com/index.php?option=com_content&task=view&id=46&Itemid=1

WS: Wow that's impressive that you threw out that entire URL from memory. But I must admit I'm really disappointed that my favorite chess book didn't make your list, "How to Beat your Dad at Chess" which is clearly the finest treatise on chess ever written. Wouldn't you agree?

Email ThisBlogThis!Share to TwitterShare to FacebookShare to Pinterest
Labels: Interview

Chess is Combat Against Self
Making Steinitz Make Sense
Tactics Should Never Take a Backseat
8 Cool Gift Ideas for a Chess Enthusiast
Chess Variants - Fun & Challenging
Waves of Success and Failure
Learning Lessons from Losses
Solving Chess
My Best and Worst Wins
Loser - 7 Rules for Dealing with Losses
I'm Not Good Enough to Play Chess
Thought Process Revisited
North Carolina Open
Road Warrior - Part I
Get Out of My Head!
Chess Books that Will Make you a Badass
How I Gained 434 Points in One Year
Fruits and Nuts - Crazy Chess Players
Best iPhone Apps for Chess Players
Chess End Game Study
The Birth of a Chess Tournament
Most Outrageous Moments in Chess (2)
Most Outrageous Moments in Chess (1)
You Suck at Chess
How to Become a Good Chess Player
Shannon is a Big Ole Girl
Real Life Gets in the Way of Chess
My First Year Playing Chess